XIAFLEX (collagenase clostridium histolyticum): A New Option for the Treatment of Peyronie’s Disease

Collagenase clostridium histolyticum (CCH), a purified mixture of 2 microbial collagenases, is a minimally invasive intervention recently approved by the FDA for the treatment of PD, under the brand name XIAFLEX.1,2 XIAFLEX is indicated for the treatment of adult men with PD with a palpable plaque and curvature deformity of at least 30° at the start of therapy. To ensure that the benefits of the drug outweigh its risks, the FDA has required that XIAFLEX be made available for the treatment of PD only through a restricted program under a Risk Evaluation and Mitigation Strategy (REMS) called the XIAFLEX REMS Program.2

XIAFLEX is also approved by the FDA, Health Canada, and European Medicines Agency (as XIAPEX) for use in adults who have Dupuytren’s contracture with a palpable cord. In these patients, XIAFLEX/XIAPEX is injected into the Dupuytren cord, and a finger extension procedure is performed to further disrupt the cord, which may have been enzymatically weakened by the procedure.1 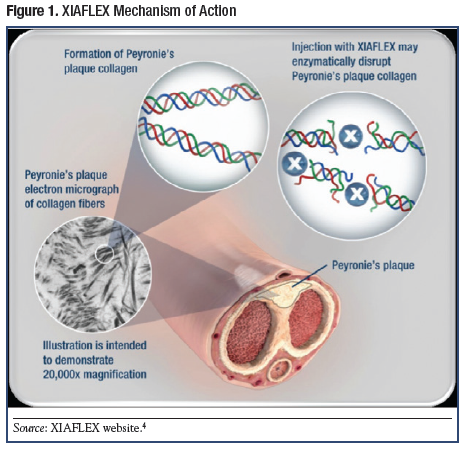 Efficacy data
The efficacy of XIAFLEX in subjects with PD was evaluated in 2 large double-blind, randomized, placebo- controlled phase 3 studies (IMPRESS [Investigation for Maximal Peyronie’s Reduction Efficacy and Safety Studies] I and II). The objective of these studies was to evaluate the safety and effectiveness of CCH intralesional injections administered twice per treatment cycle for up to 4 treatment cycles in men with PD.1,2

Patients were randomized 2:1 to receive either CCH (0.58 mg) or placebo injections plus penile remodeling. In addition, patients were stratified into 2 groups by degree of penile curvature: 30° to 60° and 61° to 90°. The duration of each study was 52 weeks.1,2

There were 2 coprimary end points, which measured the change from baseline to week 521-3:

Likewise, the mean change in the PDQ bother domain score was significantly improved in the XIAFLEX group versus the placebo group, as shown in Figure 3.1,2 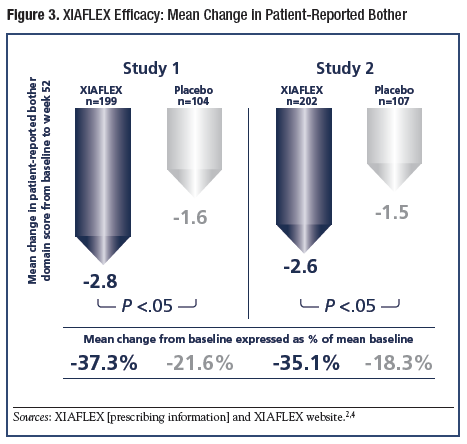 Most AEs were local events of the penis and groin and the majority were of mild or moderate severity. Of these events, 79% resolved without intervention within 14 days of the injection. The AE profile was similar after each injection; no cumulative effects were observed.2,4

Table 1 shows the treatment-related AEs that occurred in ≥1% of patients treated with XIAFLEX and occurred at a greater incidence in the treatment group than in the placebo group. The most frequently reported AEs (≥45.0%) in XIAFLEX-treated men included penile hematoma, penile swelling, and penile pain.2 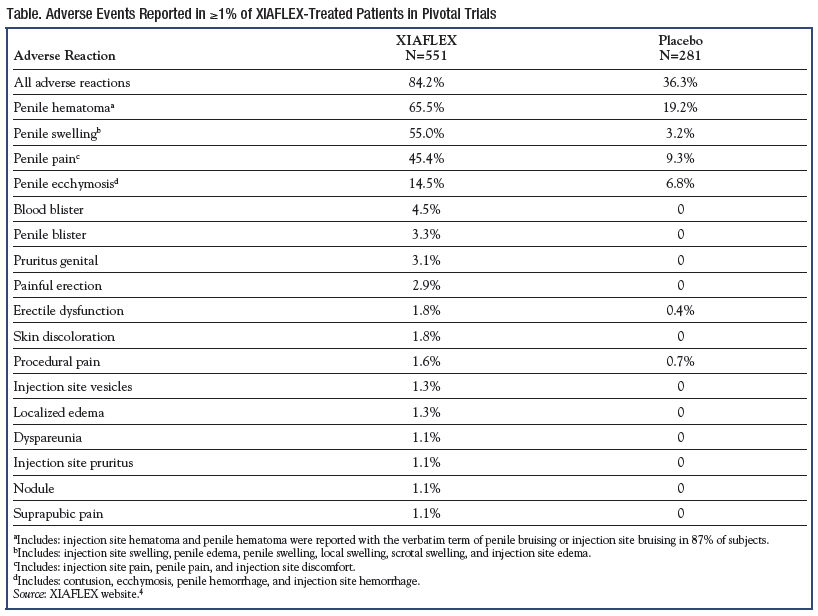 In the controlled and uncontrolled clinical studies of XIAFLEX in PD, 1044 patients received a total of 7466 XIAFLEX injections. There were serious AEs. Five of 1044 (0.5%) patients reported corporal rupture as an AE after XIAFLEX injection. In other XIAFLEX-treated patients (9 of 1044; 0.9%), a combination of penile ecchymosis or hematoma, sudden penile detumescence, and/or a penile “popping” sound or sensation was reported, and, in these cases, a diagnosis of corporal rupture cannot be excluded. These patients were managed without surgical intervention, but the long-term consequences are unknown. Severe penile hematoma was reported as an AE in 39 of 1044 patients (3.7%) who were treated with XIAFLEX.2

The following CPT® codes are used to bill for the injection procedure7:

Conclusion
PD is believed to be a wound-healing disorder that occurs in genetically susceptible men and results in penile curvature deformity.9,10 Typically, PD does not resolve without clinical intervention.11

Only a small percentage of men with PD seek treatment (approximately 118,000 in the United States). Within this population of men who seek treatment, 38,646 (32.7%) have moderate to severe curvature deformity of ≥30°.5

Effective treatment options for PD are limited. Most historically available, minimally invasive treatments have neither substantial data from controlled trials showing efficacy nor FDA approval as safe and effective for the treatment of PD. Surgical intervention may correct curvature deformity, but is associated with complications such as penile shortening, ED, neurovascular injury, infection, and decreased sexual sensation.9,10

XIAFLEX injection is FDA approved as effective for the treatment of PD in men with a palpable plaque and curvature deformity of at least 30° at the start of therapy, and represents an alternative to surgical intervention in appropriate patients.2

In today’s challenging healthcare environment for providers, treatment of PD with XIAFLEX promises to be an important therapeutic innovation for the practices of urologists and others who treat men’s urological conditions. Not only can XIAFLEX fulfill an unmet clinical need in treating appropriate patients with PD, but it also represents a potential business opportunity for urologists who are interested in expanding their service offerings to support the provision of comprehensive men’s healthcare.